Tony Plumb and the Moles of Ellodian

“All I want is the truth, I want the truth. 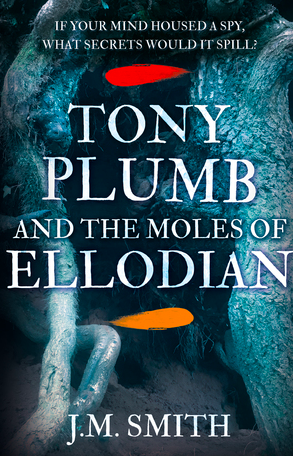 Tony Plumb and the Moles of Ellodian is an interesting middle-grade/YA book. I can safely say I have not read a book with a similar plot or something that has kept me guessing what is going on for so long. If you are interested in books that cover topics like mental health, family life, death, and social work (to name a few) you would enjoy Tony Plumb and the Mole of Ellodian.

Tony Plumb, the main character, is thirteen and more or less lost in the foster care system. He has a questionable mental health history and a pet parrot. Unlike most YA books, the story starts from page one. There is no introduction period and the story isn’t picking up around chapter three, it literally is starting on page one. It is refreshing to jump into a story without having to meet all of the characters, but it does take a few pages to get used too. Overall, it was probably one of my favorite things about Tony Plumb and the Moles of Ellodian. The pace only picks up as the story progresses. You do not have to worry about any slow points!

Without giving too much away, Tony is troubled by his parents’ death and left with unanswered questions. Mainly three he must answer.

I liked the vulnerability of Tony. He becomes emotional when picked on about the nature of their death and when questioned too much. The story takes place between two places, the world of Ellodian and his therapy sessions.

Ellodian is a unique and mysterious world. You will find yourself questioning the purpose of the Moles—and really everything. It was this curiosity that pushing me to finish this book. Beyond the interest in Ellodian and the Moles, Tony is a complex character. He is dealing with a lot of “heavy” emotions that I do not often see in YA/middle-grade books.

His therapy sessions are raw and realistic. Each session dives deeper into Tony’s life, his relationship with his parents, and his parents’ lifestyle as a whole. The way Tony’s emotions and therapy is handled is not only easy to understand but appealing to read. You will be anxious as Tony to finally have the answers.

Tony Plump and the Moles of Ellodian is a mix of fantasy and realism. While Ellodian is a wild ride, so is Tony’s past. Overall, I enjoyed the book and will definitely be recommending it to friends who are interested in the genre. Keep in mind J.M. Smith is not an American author, but I had no difficulties reading her work. If you decide to read Tony Plump and the Moles of Ellodian, I doubt you will be disappointed.

Have you read Tony Plumb and the Moles of Ellodian? Do you want to? Have you read other books that deal with children in foster care/the system?